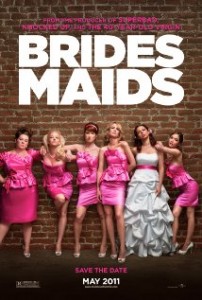 If you’ve been entrusted with the task of being a bridesmaid or a maid of honour, you need to pay close attention. It seems that there are certain members of the bridal party who seem to think that their duties are dispensed once they deliver the bride to the altar – wrong! Your role as bridesmaid starts the minute you accept the honour and doesn’t finish until the new Missus returns from her honeymoon in a flush of newlywed bliss.

You might think this is obvious, but here’s our rundown on our rules of bridesmaids etiquette for you:

1. Give her the hen she wants

Regardless of whether you have the same extracurricular tastes or not, make sure you give your bride the kind of send-off she’ll actually enjoy. Don’t force her on a pub crawl in luminous fancy dress if she’d prefer a quiet weekend away somewhere, don’t arrange a relaxing host of spa treatments if she’s quite hyperactive and would prefer to race through activities like It’s A Knockout instead, and likewise if she hates being out of control it might be a foolish move to plan a secret hen do without giving her any insight at all.

It might seem obvious that the big day is all about the bride but you would be surprised how many bridesmaids have felt the urge to upstage the main attraction! From groom’s sisters who customise their outfits outlandishly to an entire suite of bridesmaids who fall pregnant before the big day, we’ve heard it all. Try to remember that you are there to support your friend/sister and you ought to be trying to minimise as much stress as possible, not contributing to it!

Well, of course it does, but in comparison to the bride it doesn’t matter. Technically no one will be looking at you. Bear this in mind if you’re thinking about kicking off about the fact that you don’t like a dress that has been bought for you or if time is running short on the morning of the wedding and you don’t have time to properly beautify.

The morning of the wedding is the culmination of months of severe thinking, planning, saving and hoping. As such, it can turn out to be some of the most chaotic and emotional hours you’ll ever experience. The best thing you can do, regardless of what’s going on around you, is to remain calm. Chances are that your serenity will rub off on even the biggest bridezillas.

5. The Dress is your top priority

If you haven’t got married yourself you might not realise this, but wedding dresses are actually really weird to wear and kind of tricky to get around in. It seems that many bridesmaids are very vigilant before the ceremony in making sure The Dress looks perfect for the big entrance but then promptly forget about it. Error! Every time the bride sits down and stands up during the ceremony, you need to sort out her dress. Wherever she walks throughout the day, you need to be in close vicinity in case her train needs carrying. Before she does her first dance, you need to ask whether she wants her train bustled. And yes, if she’s going to the loo, you might need to help with that too! Never let The Dress out of your sight…

It doesn’t matter if you hate having your photo taken; the second you accepted the invitation to be a bridesmaid you signed up to at least an hour of posing for photos. You should be honoured that your friends want you to help them preserve the moment. You should also be prepared to turn into a militant fishwife and help to round other people up for photos – they’ll be busy chatting and drinking and will need to be told repeatedly in order to speed the process up, so ignore them if they start to call you the Nazi Bridesmaid.

Whether the bride is freaking out that the candles haven’t been lit or having a panic attack because she can’t find the marriage certificate the next morning, your job is to tell her it’ll all be ok. If this means that you light every single candle yourself, root through bins to find the certificate, dissipate brewing arguments or keep annoying relatives off her radar then so be it. The only expression on the bride’s face ought to be a smile and you can facilitate that.

8. Let your hair down but don’t let it fall out

After a job well done, you’re going to want to toast your dazzling contribution to a spectacular wedding and there will be plenty of booze to help you do so. Try to take it steady. When a bride has to look after her bridesmaids because they’re falling down drunk, heckling in the speeches or singing lyrics that don’t match the song the DJ’s playing, things have gone terribly wrong. It should only ever be the other way round. You are an ambassador for the bride and groom, so don’t show them up by being roaring drunk before teatime.

In the booze-charged revelry, you may suddenly find yourself surrounded by eligible bachelors and it might seem like a great idea to embark on a love affair. It’s not. There’s no bigger cliché than a badly behaved bridesmaid, so remember that you’re there to support your friend and not to hook up with anyone. Head off to bed alone; your bride (and conscience) will thank you in the morning.

It’s not your God given right that you are going to be a bridesmaid at this wedding. Even though there’s a lot of hard work involved (and some expenditure in many cases), it really is a privilege to be asked to play such an important role in a wedding. As such, when the bride first asks you to be bridesmaid, make sure you thank her for the consideration. Also, send her a little note after the wedding that will be waiting for her when she gets back from honeymoon to tell her how much you enjoyed the day and what an honour it was for you to be part of it.